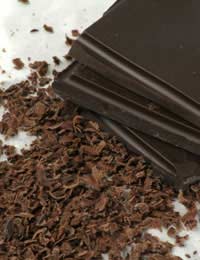 Unsweetened, or baking chocolate is simply the cooled and hardened version of chocolate liquor. However, chocolate liquor is technically not yet chocolate. Despite its name, chocolate liquor contains no alcohol. It is made up of the finely ground nib (or centre) of the cocoa bean to form a smooth liquid. This liquid is quite bitter to taste as it has had no added sugar and is essentially chocolate in its purest form. The liquor is cooled and moulded into blocks, which contain approximately 53% cocoa butter.

Baking chocolate is used primarily as an ingredient in cooking recipes, or as a garnish. The instructions on the packet will specify that it is only to be used for baking. You should use baking chocolate if you are making such items as brownies, cakes and cookies. Although it has a more intense flavour than other types of chocolate, baking chocolate may actually have quite a low cocoa-butter content and a comparatively gritty texture. Therefore it is unsuitable for eating on its own, but is perfect for mixing with other ingredients as part of a recipe.

It is important to use the type of chocolate, which is specified in your recipe. For example, you should never use a bittersweet chocolate if the recipe specifies semi-sweet or sweet. However, the importance of the chocolate’s quality actually depends on the amount specified in the recipe. Dishes such as chocolate mousse, chocolate soufflé or chocolate truffles all specify a large amount of chocolate so it’s important that you used the specified type and of the highest quality possible.

Baking chocolate varies in definition, but is essentially used primarily for baking in recipes where it is mixed with other ingredients. It is the cooled, hardened version of chocolate liquor, which is the ground nib of the cocoa bean. Unsweetened, or baking chocolate is not to be eaten on its own as its flavour is relatively unpalatable compared with eating chocolate. It is quite bitter to taste and has a gritty texture. It is best mixed with other ingredients and made into delicious treats such as cookies, cakes and chocolate mousses.