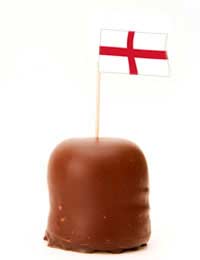 Chocolate has been a popular confectionary in England for over two hundred years. Since cocoa beans were brought over after the demise of the Spanish Empire it has been experimented with and developed over the years into what we know it as today. There are many manufacturers of chocolate in England now, including Nestle, Mars and Rowntrees. However it is Cadbury’s chocolate that has its history rooted in the arrival of cocoa beans into England, and made one of the first, solid chocolate bars.

When English and Dutch sailors first discovered cocoa beans on a Spanish treasure ship, they didn’t get off to a good start. The sailors mistook the beans for sheep’s droppings and threw them overboard. Luckily, however, the Italian explorer, Francesco Carletti, realised the potential of the fabulous beans and took them back to Italy, where they eventually spread to the rest of Europe.

When chocolate reached England in the 1650s, its expensive import values meant it was only the preserve of the very rich. The Industrial Revolution and increase in cocoa plantations world wide gradually reduced the price of cocoa beans and chocolate became a drink for the masses.

London's first Chocolate House was opened in 1657 by a Frenchman. Before long more chocolate houses were opened where people could socialise and drink a variety of choclate drinks. By the end of the 18th century London's chocolate houses began to close or evolve into gentlemen's clubs.

Chocolate production in England first got under way in 1795 when Dr. Joseph Fry of Bristol began to use a steam engine to grind cocoa beans. This led to the manufacture of chocolate on a large scale. By 1847, Fry & Sons sold a "Chocolat Delicieux a Manger," which, thought to be the first chocolate bar for eating. The Cadbury Brothers of Birmingham brought out a similar product in 1849, and displayed it at an exhibition in Bingley Hall in Birmingham, England.

Cadbury’s Chocolate started as a one-man business by John Cadbury in 1824. The business started as a grocery shop, but in 1831 he became a manufacturer of drinking chocolate and cocoa.

By 1831 the business had expanded so much that he needed to move premises. He rented a small factory in Crooked Lane, which was to the foundation of the Cadbury brand. In 1866 John’s son George Cadbury brought to England a press that could remove some of the cocoa butter from the beans, bringing about a smother, more palatable drinking chocolate.

But in 1875, a Swiss manufacturer produced the first milk chocolate bar using powdered milk. The Cadbury brothers made milk chocolate bars from 1897. The bars were coarse and dry. However, over time the recipe improved and has become the popular taste of Cadbury’s that we know today.

Chocolate production in England has influenced the consumption of chocolate across the world. From the development of the steam engine to being part of the process that developed tasty milk chocolate bars for mass consumption, the English have paved the way for the chocolate we now know and love. Cadbury’s chocolate is one of the largest manufacturers of chocolate in the world and visitors can go to the factory in Bourneville, Birmingham, to learn more about the growth of the company.