Home > All About Chocolate > Chocolate As A Cosmetic 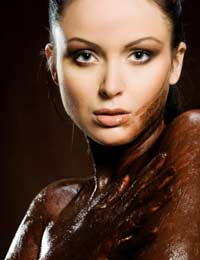 There's plenty of evidence to indicate that chocolate is a mood booster and powerhouse of mood-changing chemicals, but surely there’s no reason to believe that using chocolate in cosmetics can benefit your appearance, health and wellbeing?

Well actually, there’s some new research that suggests we might all benefit from rubbing a little chocolate on our bodies, but not in the way that many health spas and beauty therapists try to convince us will be beneficial.

The beauty industry is often keen to tell people that some magic ingredient will be just as good for us when used as a skin treatment as when consumed. In recent years, this has been the case for honey, ginseng, acai berries and brazil butter, to name but a few foods used in facials and body wraps. But there’s a major misconception about the role of topical (applied to the skin) treatments, which causes much confusion. The truth is that most things applied to the skin will not penetrate it.

The reason that some medicines, such as the contraceptive pill and nicotine replacement patches, work though ‘dermal transfer’ is that they have a sophisticated delivery system built into their structure that carries molecules through the skin and into the body’s circulatory system. This is true of top-of-the-range skincare brands, too. But natural ingredients have almost no dermal penetration. If this wasn't the case, women who rub cocoa butter or coconut oil on their skins would get larger and heavier, because their bodies would absorb the calories in those high-fat treatments. Also, we would sink when we’d been swimming for a while because of all the water soaking through our pores and making us less buoyant.

Cocoa beans contain a range of amazing ingredients that alter the mood. The most recent discovery is theobromine, which stimulates the central nervous system, and also contributes to the body’s natural diuretic and appetite-stimulating processes. There’s also a range of endorphins or feel-good hormones and phenols that – when eaten – can help to reduce the risk of heart disease, and catechins, part of the antioxidant family, which help to slow ageing at the cellular level and fight cancer.

Two chemical compounds can be found in cocoa that actually penetrate the dermal barrier: tryptophan, which boosts the body’s antidepressant compounds; and caffeine, which reduces tiredness and stimulates the brain. Caffeine has begun to appear in a range of cosmetic treatments – most notably those for under-eye circles and bags – where it has a measurable effect on skin tightening and brightening.

So while we may not gain all the benefits by rolling in chocolate that we’d gain by eating a few high-quality grams of the food, we will still find benefits from using it to cleanse, soothe and treat our skin. There’s also a substantial psychosomatic benefit. Simply talking about chocolate, smelling it and seeing the packet of a favourite brand can be enough to generate mood-changing endorphins. So for a chocolate fan, knowing that they are about to be steeped in their beloved food may actually do them as much good as eating it would. This is because the endorphins that such a prospect induces serve to remove stress from the body, promote healing and change the neural pathways, creating positive rather than negative thought patterns in the brain.

The range of treatments is large, from cocoa butter based products, such as lotions and lip balms, to the exfoliating abilities of cocoa powder. Looking at the function of such ingredients, it’s clear that both have substantial treatment value:Both products offer the familiar and highly evocative scent of chocolate, with its stress-reducing properties.