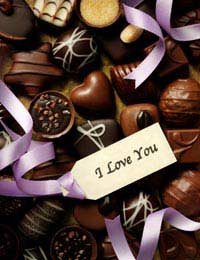 There are many myths about chocolate, but which are true and which are false? Modern research has solved some myths and confirmed others.

Myth Disproved. The idea that indulging in chocolate can cause a spotty face is just not true. There are some extremely unusual cases where a new theory of acne flare-ups could be true: recent Australian research that suggests that high carbohydrate foods can cause an insulin production malfunction in a rare number of cases. It seems that chronic consumption of high carbohydrates can cause some women to produce excessive levels of insulin. This means that insulin resistance causes a susceptible woman’s ovaries to produce extra testosterone, and testosterone is one of the triggers for acne outbreaks. This highly atypical condition may be linked polycystic ovary syndrome and is being investigated in several studies.

Why the myth? Any high fat and high sugar diet, eaten chronically, will possibly contribute to acne, but you’d have to be eating rubbishy food morning, noon and night to really affect your skin health and chocolate actually contains several trace elements that may help with skin improvement. There is a suggestion that teenagers, after World War Two, had outbreaks of spots when rationing ended and they were able to get their hands on lots of chocolate for the first time and that could be why chocolate, rather than all high-fat, high-sugar foods, has been linked to acne.

Chocolate is an Aphrodisiac

Myth proved! Cacao’s reputation for promoting physical love began more than 1,500 years ago, when they Mayans and Aztecs used a chocolate drink as an aphrodisiac and also as a way of communicating with their gods in visions and dreams. Cacao, and the chocolate made from it, contain two compounds: phenylethylamine and serotonin which are recognised by modern bio-chemists as mood lifting agents. They are substances that are created by the body and occur naturally in the human brain when the individual experiences positive feelings such love, passion, excitement or physical pleasure. Together they deliver a swift mood elevation, lifting a happy feeling into exaltation, and cause changes in the body such a rise in blood pressure and a faster heart rate which cause a further mood elevation into euphoria. These two compounds are also released by the nervous system when people eat chocolate, although some recent research suggests that the female endocrine system releases more of the compounds then the male when chocolate is consumed – which could explain why women love chocolate so much.

Myth proved! Those same compounds: phenylethylamine and serotonin, along with theobromine, which is also found in chocolate and is similar to caffeine, are also mildly addictive. Women respond more rapidly to phenylethylamine than men, but over a period of time men too succumb to this addiction and one of the most famous chocolate addicts was Casanova, who drank chocolate before going out to seduce women. He thought chocolate only worked for men though, and didn’t offer it to his conquests!

Myth or fact? The jury is still out on this one. On one hand, magnesium deficiency is linked to so-called Pre-Menstrual Tension or Pre-Menstrual Syndrome and increasing numbers of women are consuming more magnesium, along with Vitamin B6, to relieve some of the physical and psychological symptoms of PMT. This is because PMT is caused by alterations in the hormone cycle. Almonds enrobed in dark chocolate can be a tasty addition to your diet and give you a double dose of magnesium. On the other hand, some women find that caffeine and theobromine can cause mood swings, so each of us needs to find out which we are: a woman who is rebalanced by chocolate or one who is unbalanced by it!