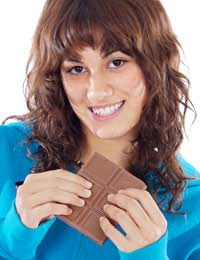 There are many myths and false facts about chocolate including those about its production, quality, properties and history. Chocolate is a very popular confectionary treat throughout the world, both as a drink and a solid bar. It has been enjoyed as a mood enhancer and even an aphrodisiac throughout the centuries. Knowing genuine facts about your favourite food may enhance your enjoyment of it and also help keep it in tip-top condition.

How to Enjoy Your Chocolate

It is thought by some people that chocolate cannot be stored in the fridge; some thinking that refrigerating chocolate impairs its flavour. However this is not true. Chocolate is often delicious when slightly chilled and its flavour is not impaired at all. Factors that can impair the flavour of chocolate include:If your chocolate faces temperatures above 18°C it is likely to melt. If the chocolate is kept at fluctuating temperatures it can develop creamy white patches. These patches do not impair the flavour of the chocolate, just its appearance. Both air and humidity can also affect chocolate, which is why so many chocolate bars are sealed in foil wrapping.

Chocolate brings instant comfort and acts as a mild anti-depressant by increasing our serotonin and endorphin levels. Chocolate also contains caffeine, which has a mild amphetamine effect. It also contains phenylethylamine (PEA), a naturally occurring amino-acid which is sometimes considered to have aphrodisiacal effects and is even said to be able to "cure" hangovers. What’s more, eating chocolate can bring on feelings similar to those, which we feel when we are in love (PEA is produced naturally by the brain during states of emotional euphoria).

Other stimulants present in chocolate include dopamine and serotonin. Both dopamine and serotonin alleviate pain and promote feelings of happiness. In particular, serotonin produces feelings of pleasure in a similar way to sunlight. Chocolate also contains theobromine, a stimulant that is said to make a lasting improvement to the mood. Its presence is one of the causes for chocolate's mood-elevating effects.

Chocolate as an Aphrodisiac

In 1624 Johan Franciscus Rauch an Austrian professor, tried to ban chocolate from monasteries and urged monks not to drink chocolate as he said it ‘inflamed passions’. However it has never been proved either way whether chocolate does have aphrodisiac qualities.

It comes as no surprise that chocolate is so widely consumed across the world. It has many mood-enhancing and stimulating properties and tastes delicious too. It will serve as a quick pick-me-up, a mood stimulant, and even a confidence booster.