Home > All About Chocolate > Uses of Chocolate 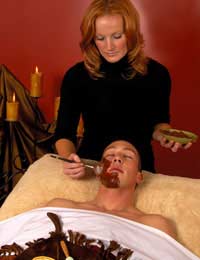 There are many uses for chocolate; it is not just designed for eating as a confectionary. Before it was discovered by the Spanish and brought to Europe and developed into the chocolate we know today it had many and varied

Cocoa as a Currency

Cocoa beans were used as a monetary unit in Central America, used to pay taxes to the Aztecs in 1000AD.

Chocolate as a Remedy

In 18th Century England, a chocolaty drink was used to prevent and cure stomach aches. In Central America it was used to build up resistance and fight fatigue. The Emperor Montezuma once declared that "the divine drink…”permits a man to walk for a whole day without food." For a natural face pack chockfull of antioxidants, melt a block of dark chocolate and apply it to your face. Leave it for 15 minutes to harden. It is said to aid skin complexion.

Chocolate as a Culinary Ingredient

Chocolate isn’t just used in confectionary, drinks and sweet spreads. You can use it in the kitchen and add it to a variety of savoury dishes. Why not try making a delicious chocolate sauce to serve with turkey, game or even strawberries? It can also be mixed into a sauce with red wine and chilli and added to red meat dishes and chilli con carne.

You can also use chocolate to make interesting additions to drinks. For a tasty chocolate martini, combine 3tbsp vodka, 1tsp white creme de cacao and 1/2 tsp white creme de menthe in a shaker with 3 ice cubes. Shake the ingredients and pour them into a chilled martini glass.

For a non-alcoholic chocolate cream soda, mix 5tbsp milk and 2tbsp chocolate syrup in a tall glass of soda water or lemonade. Add 2 scoops of chocolate ice cream, then mix and serve.

Other Uses for Chocolate

Some more unusual uses for chocolate have been documented in the past. It can be melted and used as an interesting item of clothing such as a dress or corset (if applied thickly). It can be moulded into a number of shapes, such as an edible model of a house.

Chocolate has many versatile uses that fall outside of the traditional confectionary boundaries. In the past it has been used as a medicinal remedy and a currency; now it is sometimes moulded into large chocolate sculptures or melted into chocolate fountains, or even used in extreme examples of fashion wear.