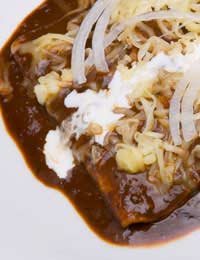 Chocolate is not just used in sweet dishes. In fact chocolate has been used in savoury dishes for many years. Many recipes all over the world use chocolate as an ingredient in a variety of dishes, including meaty game dishes, enchiladas and cakes.

Chocolate and chilli are now used as a combination in a number of sweet and savoury recipes, including cakes, biscuits and the Mexican mole.

Chocolate is a common ingredient in cooking in certain parts of Europe and Mexico. Several Spanish Catalan dishes are flavoured with chocolate; Mexico has a dish called mole (pronounced molay), which is a chilli and chocolate sauce that's used as the basis for several meat and vegetable dishes (including enchiladas). In Italy chocolate is used to accompany boar and hare dishes; chocolate also makes a great accompaniment to game dishes. Why not try making a sauce to accompany meat that’s made with red wine, chocolate and chillies? This sauce will go well with red meats such as venison, pork and wild boar.

It is not surprising that chocolate is so popular in savoury dishes. A good quality dark chocolate or cocoa will have deep cherry tones, sharp tangs and a slight bitter sweetness that complements meat in a similar way that red wine can.

Chocolate Dishes Over the World

Don’t be afraid to use chocolate in recipes at home. The flavour of chocolate is rarely detected in dishes and lends more to the consistency of the dish than the flavour. Chocolate used in any stewed meat dish will provide a silky texture with slight tart overtones. The sweetness of the chocolate will hardly be noticeable. Why not try adding a dash of chocolate the next time you make chilli con carne or even spaghetti bolognaise?

Chocolate is a fantastic ingredient to use in savoury dishes. A good quality chocolate with lend a silky texture to dishes and will have slight cherry tones and a tartness that’s almost like a liqueur. Chocolate works well with meat dishes such as game and has a similar effect as red wine does in cooking. Why not try making a Mexican mole sauce using chocolate and chillies? Or experiment with chocolate, chillies and red wine and make a delicious beef stew or venison dish?