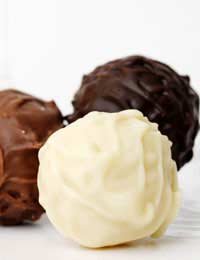 White chocolate can be difficult to work with when baking cakes and biscuits. Occasionally when cocoa butter is melted it can split and create an oily compound (you can rectify this by re-emulsifying – melting a little butter or chocolate and whisking it all together). It’s important to avoid mixing the melted white chocolate with any water droplets as this can turn the mixture lumpy and grainy. It’s also worth watching out for evidence of browning. Some white chocolate brands can darken when baked.