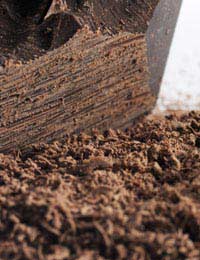 Bitter chocolate is defined as containing more than 35% chocolate liquor. Despite its name chocolate liquor contains no alcohol. It is made up of the finely ground nib (or centre) of the cocoa bean to form a smooth liquid. This liquid is quite bitter to taste as it has had no added sugar and is essentially chocolate in its purest form. The liquor is cooled and moulded into blocks, which contain approximately 53% cocoa butter.

Bitter chocolate is often used in cooking and is also known as unsweetened and baking chocolate. Bitter chocolate is best used in conjunction with other ingredients and used to make tasty treats such a chocolate cookies, muffins and chocolate mousses. Bitter chocolate is the best option for use in cooking as it gives the chef greater control over the consistency and sweetness of the dish (for example you can determine the amount of sugar added to the dish).However, chocolate definitions can be confusing. For example, what’s the difference between bitter chocolate and bittersweet chocolate? And what do you do if you go to the shop and find that chocolate is simply defined by its cocoa percentages rather than terms, such as baking and eating? By knowing the cocoa percentages of the various chocolate types, you are more likely to get the best type for the specific purpose you want to use it for.

Bitter chocolate contains cocoa solids and cocoa butter. It is chocolate in its purest form and has a very bitter taste due to the absence of added sugar. It is also called baking chocolate and cooking chocolate.