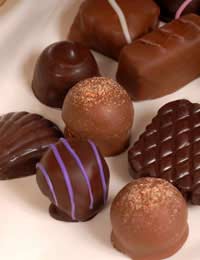 Semi-sweet and bittersweet chocolates contain cocoa liquor, sugar, cocoa butter, vanilla, and sometimes soy lecithin (which acts as an emulsifier). The quality and blends of cocoa beans, amount and quality of the added ingredients, and the processing determines the quality of the chocolate. Each brand has its own special formula and method of processing.

Semi-sweet chocolate will keep for several years, if well wrapped and stored in a cool dry place with good air circulation.

Below are details of different types of chocolate:

Semisweet chocolate: this chocolate has been slightly sweetened during processing, and is most often used in frostings, sauces, fillings and mousses. It contains a high percentage (up to 75%) of cocoa solids, and very little added sugar.

German chocolate: this chocolate is dark, but sweeter than semisweet chocolate. Interestingly, German chocolate has no connection to Germany; it was developed by a man who was called German.